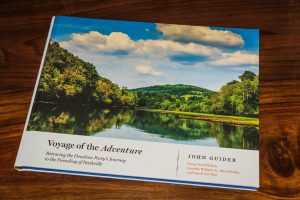 Voyage of the Adventure  View the Recording

In 2016, artist John Guider followed the journey John Donelson and his party began from the shores of the Holston River in 1779 to the French Lick above the Cumberland River.  Donelson’s plan was to bring a flotilla of settlers to the area now known as Nashville to reconnoiter with James Robertson, who was taking a land route to the area. Donelson’s party included a large number of enslaved people and the route they took led them through lands occupied by Native Americans. Guider’s photographs of his experience inspired an Emmy Award-winning documentary of the trip, directed by Will Pedigo for Nashville Public Television.

In 2020, the Vanderbilt University Press published Voyage of the Adventure: Retracing the Donelson Party’s Journey to the Founding of Nashville with Guider’s photographs and a series of essays by scholars who bring new perspectives on the legacy of the historic voyage. The book’s writers, including Carroll Van West,  Learotha Williams, Jeff Sellers, Albert Bender and John Guider himself came together on April 9 for a lunchtime discussion on the legacy of John Donelson. 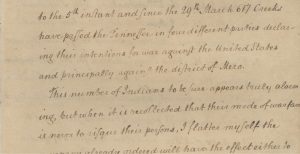 Vanderbilt’s Special Collections is home to the James Robertson Papers, composed of original letters and documents belonging to the early settler. The papers date from between 1784-1814 and were given by Robertson’s son Dr. Felix Robertson to the University of Nashville. In 1779, James Robertson and a small group of frontiersmen travelled across the Cumberland Mountains to French Lick. The group connected with the Donelson party and established Fort Nashborough. Over the years, the settlers were exposed to numerous raids by the Chickamaugas. The Robertson Papers contain accounts of their interactions with Native Americans and efforts to establish a local government.

In 2021, Vanderbilt’s libraries digitized and transcribed the collection, making the materials available to the public through JSTOR Community Collections. Please join us for this discussion about the legacy of James Robertson and the role the papers play in suggesting new perspectives for Nashville’s early history. Dr. Brandon A. Owens, Sr., director of library services and adjunct lecturer, John Hope and Aurelia E. Franklin Library and School of Humanities and Behavioral Social Sciences, Fisk University, will moderate a panel including Mary McSparran, a student in the School of Information & Library Science at Indiana University, Bloomington, who transcribed the papers,  Zach Johnson, curator of special collections, State Historian and Director of the Center for Historic Preservation at Middle Tennessee State University Carroll Van West and  Daniel H. Usner Jr., Holland N. McTyeire Professor of History at Vanderbilt University.