Vanderbilt University has a long tradition of producing and serving military leaders going all the way back to Chancellor Kirkland over 100 years ago. With concurrence of the faculty at the time, he required military training for all male students as the nation entered World War I. By 1918, Vanderbilt had established the Student Officer Training Corps or S.O.T.C. the forerunner of today’s Army and Navy ROTC, which continues on at Vanderbilt.

From 1917-18, Vanderbilt students trained with the Student Army Training Core or S.A.T.C., and filled the ranks of the armed forces. The Medical School formed the Vanderbilt Medical Unit and male students took up mandatory military training in cadet units.  Alumni in the American Expeditionary Forces sent reports of their activities in France, describing the horrors of trench warfare as well as the joys of running into fellow Vanderbilt men while abroad. Grantland Rice, (’01), a well-known sports journalist, wrote for the Stars and Stripes newspaper, while Donald Davidson (’17) served as a lieutenant in the 81st Division which fought in the Meuse-Argonne Offensive. The university lost 44 men in the First World War, and perhaps the most revered of these was Irby “Rabbit” Curry (’16), hero of the 1916 football team and an All-American who perished in aerial combat over France on August 10, 1918.

This year Vanderbilt University honored the service of military veterans and celebrated their unique contributions to campus culture through a series of videos, social media posts, photo exhibitions and more to commemorate Veterans Day, Wednesday, Nov. 11, 2020. Continuing our collaboration with Vanderbilt’s Army and Naval Reserve Officers Training Corps programs, the libraries worked with Professor Brandon Hulette to curate an exhibition of photographs and artifacts from Special Collections to be exhibited during Veterans week at both E. Bronson Ingram College and the second-floor gallery of Vanderbilt University Medical Center. We are proud that Vanderbilt’s University Archives is the place of record for many of our veterans’ papers. 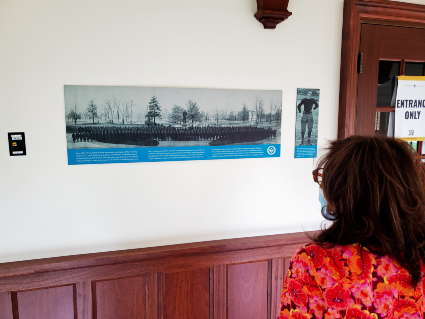