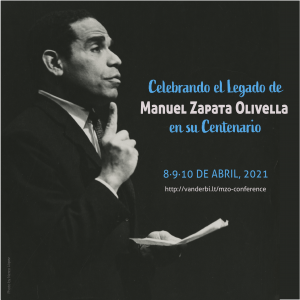 Vanderbilt hosted  the “Celebrando el Legado de Manuel Zapata Olivella”  international conference  to celebrate the centenary of Manuel Zapata Olivella, noted Afro-Colombian novelist, anthropologist, folklorist and physician. Vanderbilt Library’s Special Collections houses the papers of Manuel Zapata Olivella and that of his sister Delia, dancer, choreographer and folklorist. The program featured scholars from Colombia and the U.S. who explore themes that address race, political activism, culture, literature and the performance arts.  The virtual conference was sponsored and organized by the Center for Latin American Studies, the Jean and Alexander Heard Libraries, and the Afro-Hispanic Review. A total of 80 unique education institutions – including universities, professional associations and research groups – were represented throughout the conference. Over 150 attendees logged in from 12 countries in North America, Latin America, Europe and the Middle East, representing 68 global cities. US attendees logged in from 25 states across the country. The Colombian scholars will  supported by the Center to travel to VU and use the collection in the coming year when it is safe. This was a great success and a highlight during a difficult year. Vanderbilt received many compliments for the library’s work to preserve and make accessible this diverse Afro-Hispanic collection.

The Colombian government named 2020 the year of Manuel in honor of Manuel Zapata Olivella. Since then, there have been a host of conferences and programs in Colombia. Due to COVID-19 Vanderbilt’s planned November 2020 international conference could not take place.  Colombian scholars will participate virtually now and visit campus in 2022 to use the Zapata Olivella collections, which consist of unpublished literary manuscripts, the World Congresses of Black Culture, radio programs on Afro-Hispanic folklore, ethnographies and Delia’s collection of African dance traditions and performance arts.